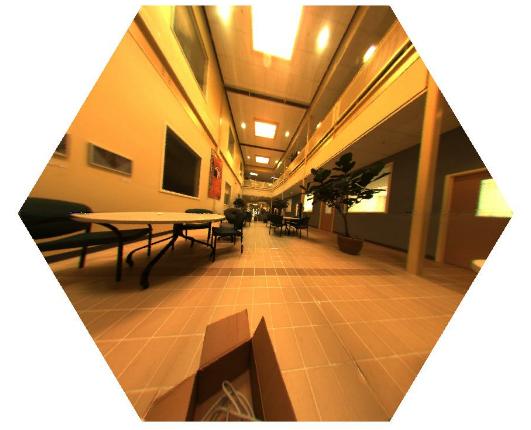 We have developed a camera which is capable of acquiring very large field of view (FOV) images at high and uniform resolution, from a single viewpoint, at video rates. The FOV can range from being nearly hemispherical, to being nearly omni-directional, barring some small scene parts being obstructed by image sensors themselves. The camera consists of multiple imaging sensors and a hexagonal prism made of planar mirror faces. Each sensor is paired with a planar face of the prism. The sensors are positioned in such a way that they image different parts of the scene from a single virtual viewpoint, either directly or after reflections off the prism. A panoramic image is constructed by concatenating the images taken by different sensors. The resolution of the panoramic image is proportional to the number of sensors used and therefore a multiple of that of an individual sensor. Further, the resolution is substantially uniform across the entire panoramic image. 1. Introduction A panoramic camera is an imaging device capable of capturing a very large field of view (FOV). Like any other camera, it is desirable that such cameras acquire the entire FOV from a single viewpoint, in real time, at high resolution which is uniform across the FOV, with large dynamic range, and over a large depth of field. Such devices find applications in many areas including tele-conferencing, surveillance and robot navigation. Many efforts have been made to achieve various subsets of these properties (i.e. wide FOV, high and uniform resolution, large depth of field, high dynamic range, a single viewpoint, and real-time acquisition. These methods of capturing panoramic or omni-directional images fall into two categories: dioptric methods, where only refractive elements (lenses) are employed, and catadioptric methods, where a combination of reflective and refractive components is used. Typical dioptric systems include camera clusters, panning cameras, and fisheye lenses. Catadioptric methods include curved mirror systems where a conventional camera captures the scene reflected off a single non-planar mirror (e.g. parabolic or hyperbolic mirror), and planar mirror systems such as mirror pyramid systems where multiple conventional cameras image the scene reflected off the faces of a mirror-pyramid. The cameras that use a parabolic- or a hyperbolic-mirror to map an omni-directional view onto a single sensor are able to capture a large FOV from a single viewpoint at video rate. However, the FOV shape is hemispherical minus a central cone which is blocked by self-occlusion. The overall resolution of the acquired images is limited to that of the sensor used, and further it varies with the viewing direction across the ring-like FOV, e.g., from a high just outside the central blind spot to a low in the periphery. The cameras using a spherical or conical mirror have similar properties as those using parabolic or hyperbolic mirrors except that they do not possess a single viewpoint. Many of the aforementioned systems provide a cylindrical shape FOV which is 360 degrees wide in azimuth, but has limited height in elevation (Fig. 1a). In certain applications such as robot navigation and surveillance, however, a hemispherical shape FOV is highly desirable (Fig. 1b). We have developed a system which is capable of acquiring hemispherical panoramic images in real time, with high and substantially uniform resolution, and from a single viewpoint. By substantially uniform resolution we mean the same level of uniformity as delivered by a conventional, non-panoramic camera.