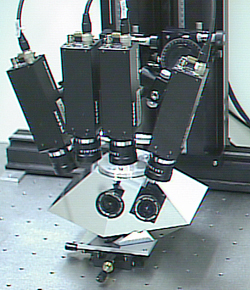 Panoramic images and video are useful in many applications such as special effects, immersive virtual reality environments, and video games. Among the numerous devices proposed for capturing panoramas, mirror pyramid-based camera systems are a promising approach for video rate capture, as they offer single-viewpoint imaging, and use only flat mirrors that are easier to produce than curved mirrors. Past work has focused on capturing panoramas from a single viewpoint. In this work, we have extended our work on the Double Mirror Pyramid Panoramic Camera, that acquires panoramic images from a single viewpoint, to multiple viewpoints.

A mirror pyramid consists of a set of flat mirror faces arranged around an axis of symmetry, inclined to form a pyramid. By strategically positioning a number of conventional cameras around a mirror pyramid, the viewpoints for the individual cameras? mirror images can be colocated at a single point within the pyramid, effectively forming a virtual camera with a wide field of view. Mirror pyramid-based panoramic cameras have a number of attractive properties, including

Currently existing designs realize a single viewpoint within each mirror pyramid. In order to capture panoramas from multiple viewpoints with these designs, the entire physical setup would need to be relocated or duplicated. The former solution lacks the capability of video rate imaging, and the latter leads to bulky designs due to the multiple mirror pyramids.

We have extended mirror pyramid panoramic camera to a generalized design that accommodates multiple viewpoints. Each viewpoint is the common mirror image of the optic points of a set of physical cameras located outside the pyramid and together they yield a seamless panoramic image. Each camera set yields a panoramic image from its associated viewpoint. The result is simultaneous, multiview, panoramic, video rate imaging with a compact design. Using a double mirror pyramid, i.e., two pyramids back to back with a shared base, helps double the height of the visual field in a manner similar to monocular imaging in our Double Mirror Pyramid Panoramic Camera. The resulting set of panoramic images can be used for stereo analysis or stereo viewing.

Figure 2. The experimental two-view panoramic camera shown with only four sensors. (a) A schematic showing double mirror pyramid with the four physical cameras associated with two faces, two per face each corresponding to one of the two viewpoints. (b) The physical implementation with four sensors (conventional cameras) whose reflections can be seen inside the two associated mirror faces.

Figure 3. (a) The four images captured by the four sensors (conventional cameras). (b) The mosaic of four images. These mosaic will be 360-degree wide when all physical cameras are present instead of just the four used here.