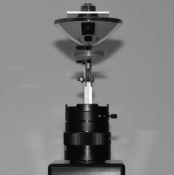 We describe a new omnidirectional stereo imaging system that uses a concave lens and a convex mirror to produce a stereo pair of images on the sensor of a conventional camera. The light incident from a scene point is split and directed to the camera in two parts. One part reaches camera directly after reflection from the convex mirror and forms a single-viewpoint omnidirectional image. The second part is formed by passing a subbeam of the reflected light from the mirror through a concave lens and forms a displaced single viewpoint image where the disparity depends on the depth of the scene point. A closed-form expression for depth is derived. Since the optical components used are simple and commercially available, the resulting system is compact and inexpensive. This, and the simplicity of the required image processing algorithms, make the proposed system attractive for real-time applications, such as autonomous navigation and object manipulation. The experimental prototype we have built is described.